skip to main | skip to sidebar


Out of my parts lot I received about 8 arcade Power Supplies. I went through them doing a basic power on test and voltage check under load. Only 2 PSUs seemed healthy, and they came with no fuse. Typically when you get something untested with no fuse, it means the fuse has blown and something is shorted. The others were either DOA or had problems like no -5v, weak voltage, and no 12v under load.

I decided to start working on the one with no -5v. When I first powered this guy on, it ran my test board just fine. But the thing is, most arcade games don't require -5v. I could have probably just left the thing as is and only used it to play games that don't require -5v, but that's not the type of restoration I do. I opened up the PSU and started looking around to see if there were any obvious signs of damage. It looked pretty good so I figured it would be easy to fix. Most of the PSU was working, 5v, 12v, AC out, etc. Only the -5v part of the circuit needed looking at. 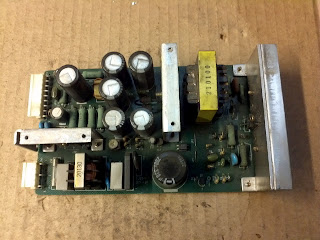 One of the other nonworking PSUs (no 12v under load) was the same model so I took that out at the same time to use for comparison or possibly parts. When I opened up the no 12v one it had a cap on it that looked like it had exploded and a resistor with a broken leg that looked black from arcing. I deemed this one to be probably very difficult to fix, and figured it would be best used for parts. For the purposes of this blog let's call the one with no -5v PSU-A and the one with no 12v under load PSU-B. PSU-B was the more damaged looking board and will be used for parts.

I don't have an EE background, and I really only do this as a hobby. My experience is mostly software, and I think I tend to see circuits from this perspective. Each component being a function with input and output, and the entire circuit being analogous to a program. I really don't know that much about PSUs or how they work... I know that it takes an AC mains voltage and runs that through a bridge rectifier and transformer to make DC voltages, but more than that and I get lost. The way I approached fixing this PSU was kind of like debugging code that you're not familiar with. When you don't know how something works the only thing you can do is start looking at it in obvious places and try to find something that doesn't look right. I started by looking at the DC output connector's pinout to see where the -5v left the device. Back tracking from this point I found the output pin on the circuit board. This pin is supposed to output -5v but instead had a very weak negative voltage, something like -0.05v. 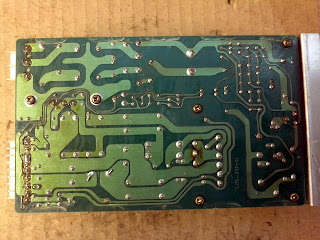 My gut instinct at this point was telling me that it must be a cap that is completely shot. I mean, old electronics' problems are always bad caps right? The -5v pin on the above picture is the bottom pin on the larger connector. Following the trace from the pin into the board the first cap I came to was a small 25v 47uF electrolytic. So I'm thinking, whether this is the problem or not, let's just replace the guy. I have a large stock of various caps so it wasn't a problem to find a replacement. I decided to replace it with a 50v cap for extra headroom. 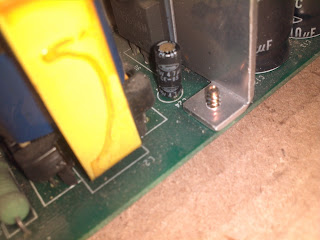 After replacing it I did a power on test, but the same problem still exhibited. Time to keep following the trace to the next component. Next component down was a diode. I did an in circuit test on the diode on both PSUs. PSU-B showed continuity in only one direction (in circuit). PSU-A showed it in both directions. So this made me think maybe the diode had gone bad? I desoldered one leg of the diode to test it, and it tested good. So at this point I knew there was some component in the circuit that was shorted out. You may be thinking to yourself, why would you ever do an in circuit test on a diode, it can't tell you if the diode is good or not! Well, if you have two copies of a circuit and you test continuity between two points and it exists on one circuit but not the other, you just found an indicator of a problem. It may not prove whether a diode is good or not, but it can prove that a circuit is faulty and you're getting closer to the problem. Removing at least one leg of the diode is the only way to really test the integrity of that component.

I kept going further down the trace until I got to the next component. This one was a 470 ohm resistor. Checking resistance on it in circuit on PSU-B showed something like 468 ohms of resistance. PSU-A showed something like 127 ohms. So right here I thought maybe the resistor was bad. Again, I desoldered one leg of the resistor to do a real check on it and it showed close to 470 ohms. I was starting to get a little discouraged at this point. I knew I was in the right part of the circuit, but I didn't know what the problem was yet. 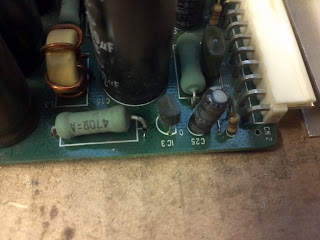 Not ready to give up just yet, I went to the next component in the circuit. It was labeled as IC3. I wasn't sure what this IC did yet, but I did suspect it. With the power off I tested continuity between all 3 legs. This thing wasn't an IC anymore, it was a jumper. I tested the IC on PSU-B the same way and it showed no continuity between any of the legs. I was confident now that I'd found the problem. I took the IC off of PSU-B and installed it into PSU-A. Making sure to note the polarity of the IC. I powered the thing on and took a reading... -4.8v coming through steady! I felt confident in the fix.

After replacing the IC I got curious and looked it up on the internet. It was a 5v regulator. Hopefully it isn't one of those cases where another component has failed which is what caused the IC to fail. But I think it's just likely that something got plugged into the PSU and drew too much current over -5v. Maybe a pcb with a shorted component of its own? If this PSU does fail again I'll at least know where to start looking.

I tested a few other components in the vicinity of the IC, but everything seemed normal. Pretty sure it's fixed for good. I decided to put everything back together and close it up. I cleaned the heat sinks and case with a solvent (99% isopropyl alcohol) to ensure good contacts. Then reapplied thermal paste to the heatsinks. 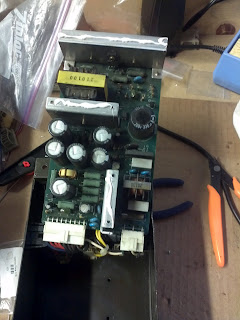 Closed everything up and screwed it back together. Put a piece of tape on the PSU and marked it 'OK' instead of no -5v. Hopefully I can get this PSU working in a cab, or maybe I'll just sell it if it turns out I don't need it. I actually have a ton of wiring harnesses, but they all have connectors for another type of PSU. I have some of those to fix too, which hopefully I can.

Sourcing the unique connectors for these vintage power supplies can be annoying. All the different connectors used in arcade wiring can be difficult to find sometimes. In an effort to keep things organized I've started a google doc for this info. The spreadsheet is viewable here: